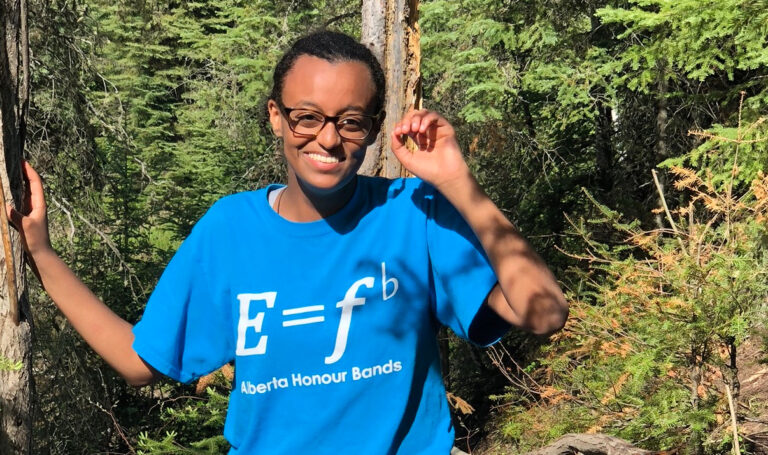 Maryam Tsegaye, a high school student from Fort McMurray, Alberta, has become the first Canadian to win the international Breakthrough Junior Challenge — an accomplishment that includes a US$250,000 scholarship, US$100,000 for her school to build a science lab, and US$50,000 for her science teacher. Altogether, her prize is worth approximately $500,000 in Canadian dollars.

The Breakthrough Junior Challenge, a global science video competition, asks participants to explain a scientific concept in a creative way, which Maryam did with a three-minute video on quantum tunneling.

We talked to Maryam, who’s 17 and in grade 12 at École McTavish in Fort McMurray, about her experience creating her video, how it felt to win, and why it should be a no-brainer that people should understand science.

Why did you pick quantum tunneling as your idea to explain?

I picked quantum tunneling since I thought I could tell a better story with that concept. And, in a way, prove that quantum mechanics isn’t only for professionals to understand; anyone can explore science!

What were your steps to create your video?

I did a ton of research and my scripting went through some harsh cuts (quantum physics in 3 minutes is tough) but I knew that what I was left with was the essence to understand the topic and nothing (in my opinion) was unnecessary. I then storyboarded the whole video to know exactly what I would need to film and what animations I would be making.

The animations themselves… were a bit of improvisation. I don’t have sophisticated animation software so I made some digital art and put them in Google Slides to animate them. The whole process, from researching to submitting, took me about two weeks.

Do you think it’s important for everyone to understand scientific ideas? If so, why?

Do most people think twice about whether or not politics/civics/social studies should be taught or understood? We know that people must understand how politics works so that they can understand the world around them and take action, so that can become better and informed citizens, right? Same with science. Except understanding politics divides people, while understanding science unites us. (In the bigger picture, anyway. It isn’t like scientists haven’t had conflicts throughout history).

How can scientists make their work accessible?

The most practical first step would be to raise more attention to science in mainstream media; unfortunately, that tends to shift over the years. In the short term, science communicators do help bridge that gap between academia and the public. In the long term, improved education would guarantee a more scientifically-aware society.

What did it feel like when you found out you’d won?

Shock? Disbelief? Shakiness? All of the above. It took several days to absorb what was happening, and I still think of how crazy it is now.

Part of the prize is a $250,000 scholarship — any thoughts about where you’d like to go to school? What are you planning to study?

I’ve got some places in mind, but I keep changing my mind. I’ve finished all my applications and haven’t received any decisions, so I don’t know yet. I think I will be pursuing a bachelor’s degree in science (at the moment, leaning towards physics).

Tell us a little bit about your work with CAGIS — why is it important to have an organization focused on girls in science?

I was thrilled to find out about CAGIS! I’ve been invited to be on a panel coming up soon so that’s exciting. I wish I saw more women in science growing up, so I’m so happy to see an association like this to inspire more girls in science.

Do you have any mentors who have helped you get to this point?

I’m quite lucky to have people in my life who support me in all situations. My parents have always helped to nourish my curiosity and my teacher Ms. Vladicka encourages me to pursue what I’d like and has been that scientist/mentor figure in my life.

Do you have any advice for other young scientists?

Read! And not just because someone tells you to. Read anything and everything. Whatever interests you in the moment, and don’t feel ashamed for it. Also, question everything! If you’re intrigued by a certain topic, you’ll tend to do this anyway, and end up learning more about it. (Doesn’t even have to be just for science either.)

You can see Maryam on February 11 at CAGIS’s panel discussion celebrating the International Day of Women and Girls in Science.