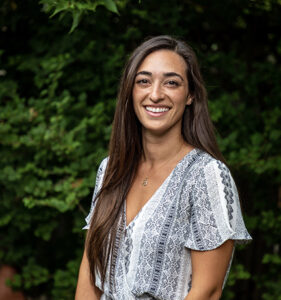 Dr. Giulia Rossi is an award-winning biologist and CAGIS alum on a quest to learn about the coolest animals!

In November, she received the prestigious Natural Sciences and Engineering Research Council of Canada and L’Oréal-UNESCO 2021 For Women in Science Supplement for her promising research and her achievements as a mentor, author/illustrator and role model.  She joins an illustrious group of 122 international laureates who have received the award since its inception, three of whom have gone on to win Nobel Prizes!

In the work she is doing now as a postdoctoral fellow at University of Toronto Scarborough, Giulia is studying ruby throated hummingbirds. She is exploring the mechanisms that allow the hummingbirds to gain enough weight for migration.

We are delighted that Giulia will be on our upcoming Panel on February 11. She joined us in advance for a short Q&A

My interest in science started at a really young age. As a young girl, I was innately curious about the natural world. I spent many hours laying in the dirt collecting rocks and fossils, looking at pond water under the microscope, and watching tadpoles develop in my backyard. In hindsight, it is clear that I always wanted to be a biologist!

Can you tell us about your journey in science and how you came to be studying hummingbirds?

My journey through science has taken many twists and turns. After graduating from high school, I decided to pursue a B.Sc. in Marine and Freshwater Biology at the University of Guelph. I learned a lot about lakes and oceans, and had some amazing experiences, from scuba diving in the Bahamas to snorkeling in Belize.

When I graduated, I was set on becoming a marine biologist, so I decided to pursue a M.Sc. at the University of Victoria in deep sea biology. My research focused on mussels that live at an extremely acidic hydrothermal vent (underwater volcano) off the coast of Japan. Typically, strong acid would dissolve mussel shells within hours, but these mussels seemed to be doing just fine. I was so inspired by the mussels that I decided to study other animals living in seemingly impossible environments.

During my Ph.D. at the University of Guelph, I studied amphibious fishes, which are species of fish that live both in water and on land. My research explored how amphibious fishes change their bodies to facilitate survival in these two dramatically different environments. I realized at this point that I was not a marine biologist, but rather, a “comparative animal physiologist” because I study how different environments and lifestyles have shaped how different animals work. Since I am particularly interested in animals that overcome life’s most extreme challenges, my current work explores the mechanisms that allow ruby-throated hummingbirds to gain enough weight to fuel their fall migration from Canada to Central America.

Can you describe your CAGIS experience and the impact being a CAGIS member had on you?

My most memorable CAGIS moment took place almost 20 years ago. My mom took me to an event held at York University where we performed cuttlefish dissections. I was amazed that the gooey gills on my dissection tray had once helped the cuttlefish breathe, and the spongy heart had once pumped blood throughout its body. I was so fascinated by the experience that I have students perform cuttlefish and squid dissections anytime they visit me in my laboratory!

Being a member of CAGIS has had a significant impact on the trajectory of my academic career. Although I was always inclined to biology, CAGIS fostered my love for science and demonstrated that there are endless opportunities for women to pursue careers in STEM. 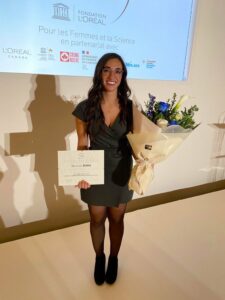 Giulia Rossi honoured by the L’Oréal-UNESCO For Women in Science program. Nov 22, 2021

What is your favourite part of being a scientist?

There are so many great things about being a scientist. One of my favourite parts is working alongside brilliant and interesting people with different cultures, research perspectives, and personal experiences. I have learned first-hand that diversity in the research environment is a driver of scientific discovery and innovation. There is such a feeling of joy when you and your team make new scientific discoveries.

Who is your STEM role model?

I have always been inspired by Dr. Roberta Bondar, the first Canadian woman and neurologist in space. She circled the Earth 129 times during her 8-day mission. I first learned about Dr. Roberta Bondar in 2001 when her photographs were displayed in a special exhibit at the Royal Ontario Museum. I remember thinking that if women could get into space, then we could do anything!

What advice would you have for a young student interested in exploring STEM/science?

I have two pieces of advice for young students interested in STEM. First, follow your interests. When you love what you do, going to school or work becomes really fun! Second, say YES to learning opportunities. In life we are always presented with opportunities to learn new things, but sometimes we shy away because learning something from the beginning can be challenging. Just remember, that you are capable of a lot and that sometimes we learn the most when we step outside our comfort zone.