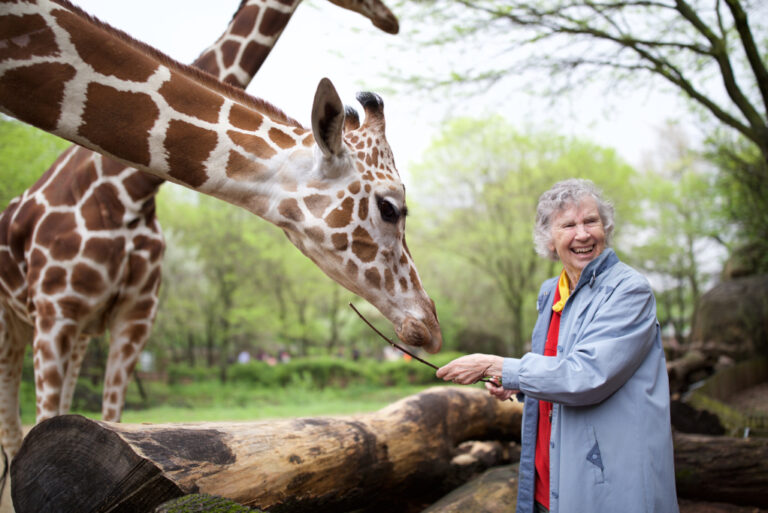 Dr. Anne Innis Dagg is the world’s very first giraffologist (that’s someone who specializes in the study of — you guessed it — giraffes).
At the age of 23, four years before Jane Goodall set out to study chimpanzees in the wild, Dr. Dagg travelled to Africa to become the first person in the world to study giraffes in the wild. She made careful observations, took notes, videos, photographs, studied their behaviour, habitat, food sources, and more.
She published her findings in many of the world’s top scientific journals, and published the first book on giraffe, the foundational text of the field of giraffology.
Despite Dr. Dagg’s impressive body of work and numerous accomplishments, she faced challenges because of her gender and was unable to secure a tenured professor position, which was essential to her continued work as a giraffologist.
Spurred by her disappointment, she began to fight for gender equity, a cause she still champions today.
Although Dr. Dagg did not have a formal academic position and could not continue her research, she continued to publish books and articles on a variety of topics including animal behaviour, wildlife management, and conservation, boasting a long and impressive list of publications.
In 2010, she returned to the world of giraffology after scientists from around the world sought her out.  She received international recognition for her work and was the subject of a documentary film, “The Woman Who Loves Giraffes.”

In her first workshop, she taught participants about animal observation skills. The second workshop will be a Q&A with Dr. Dagg and filmmaker Alison Reed, who directed “The Woman Who Loves Giraffes,” a film about Dr. Dagg’s life.
The Q and A will be open to both adults and children, with question priority given to CAGIS members.
We sat down with Dr. Dagg to find out about the worst day of her life, what inspired her to study giraffes and some of the challenges she faced as a woman in science.
How did you get interested in zoology and animal behaviour?

I became interested in animals because my father had grown up on a farm and told me about frogs and muskrats and such. My brother Donald also told me stories about animals.

What was it about giraffes that you found especially interesting?

I found giraffes interesting because they were so tall and I was so small. They also were so regal, walking across their floor in the Chicago Zoo where my mother, who had grown up in Chicago, had brought me.

When you look back on your career, what are you most proud of?

I’m most proud of the books I wrote. [These include, among many others, the foundational texts on giraffes, called The Giraffe: Its Biology, Behavior and Ecology.]

Do you have a stand-out moment or story from your research that you could share with me?

The worst day of my life was the night I was nearing the house where I was to stay in Africa. The car broke down and I was terrified, because I knew there were lethal snakes and lions about. But I was so scared that I got out of the car and walked along in the dark just to be doing something. And luckily I was picked up by another car after some time. Then I was safe.

You’ve written a lot about gender bias in science — what has your experience been like as a woman in science? Have you seen things change over the course of your career?

Things got worse as I worked at universities. Men above me did not want a woman working with them. It was a very sexist environment. And sometimes I had more credits for my work than they did so they did not like that.

What advice would you have for a girl who’s interested in science now?

I think young girls should decide for themselves what they want to do, and then do as much as they can. Often one can find an adult eager to help and that is wonderful. Go for it!

Never give up. If what you have learned is new, talk to others about this but don’t let them take over for you. You do the work yourself and then you get the prize!

To register for Dr. Dagg’s workshop on November 14, go to the CAGIS Virtual webpage. The session is open for both members and non-members!